I?t may be the happiest day of the bride and groom's lives, however, for one couple's wedding guests, it's not looking so.

In a TikTok video that has racked up over 703,400 views worldwide, user Kelli, who posts under the name @kellikeylimepie, ?flashes a wedding invitation she received where the couple wrote: "Please understand that you are obligated to pay for your own meal."

On another part of the invitation, the couple also wrote to guests: ?"All gifts appreciated; monetary gifts preferred."

Needless to say, people are not impressed ¨C including Kelli herself.

In a caption ?written over the invitation, Kelli says, "We get it, you blew all your $$$ on a wedding..."

Underneath the video, she also wrote: ?"Tell us how you really feel!"

TikTok users did not hold back with their comments, with many saying if they received an invitation with the above specifications, they would simply not go to the event.

"Lol ? how embarrassing," one person wrote. "[I'd] absolutely be sending my regrets?."

Poll
Would you go to this wedding?

"I regret that we are unable to attend," another user commented, while another said, "I wouldn't even bother to RSVP."

Other users, however, ?expressed their sympathies for the couple, who they say are obviously in a bad financial situation ¨C though they did acquiesce that also asking for a monetary gift while also telling guests to pay for their own meal can be in bad taste.

"I would be fine paying for my own meal if the invite said no gifts. But to expect cash when guests are paying for themselves is absolutely ridiculous," one person wrote.

"Wanting money over gifts is fine especially since a lot of people already live together, but paying for your own meal?! LMAO," another said.

One person said, "I swear some people get married thinking it's a FUNDRAISER."

A single TikTok user, however, seemingly was the only person to come to the couple's defence, writing: "?I'm in the minority but idk, I get it. Weddings are expensive. It's not like they are asking you to travel to another country or something."

It's unclear if Kelli attended the wedding.? 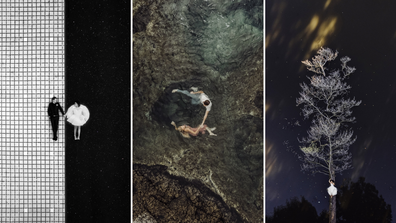 The best wedding photos taken with a drone
View Gallery