Before Ben Ford became ill, he was a regular boy living a normal life, attending school and catching up with friends.

The only major health problem he'd experienced was having his appendix removed when he was eight, and a post-operative infection meant spending longer in hospital than expected.

Before the Sydney boy's diagnosis in 2020, there were only a few signs that something might have been amiss, noticed by mum Emma.

"He seemed clumsier than normal and would occasionally vomit in the morning," she recalls to 9Honey.

READ MORE: Sisters diagnosed with cancer within weeks of each other

"When I'd pick him up from school, he didn't seem to walk in a straight line and his head was tilted to one side. He almost walked in a curve."

At first, Ford thought her son, then nine, might be suffering from some vision problems, so in December 2020 she took him for an eye test.

When the optometrist took a look inside Ben's eyes, they noticed swelling behind both of them.

"When I saw the look on the optometrist's face, I think I just went on autopilot," she says.

"I didn't really want to ask any questions, I just went straight to the hospital and we went from there."

A scan revealed the nine-year-old had a five-centimetre brain tumour, which pathology confirmed Medulloblastoma, a treatable form of brain cancer.

"We were told Ben had a tumour in his brain and it needed to be removed," she says. Surgery was scheduled for the next morning.

"He's a very brave kid, he just gets on with it, but he was quite anxious, as was everyone."

"They were able to suck the tumour out, and thankfully it hadn't spread or gone into his brain any further, so it was a little bit easier than it sometimes could be."

READ MORE: 'The last gift I could give him': Anna's huge choice ahead of her father's death

While getting through the surgery was a huge relief for Ben and his family, the next part of his treatment would prove 'brutal'.

"After surgery, he would have four intensive rounds of chemotherapy and 32 rounds of radiation therapy," Ford shares.

"He also had a stem cell 'rescue', where they basically harvest his stem cells prior to chemo and then replaced them following each round to boost his immune system.

"Obviously the cancer can kill you, [but] the treatment is just brutal and the long-term effects, I suppose, become almost a bigger concern than the cancer. Although, the cancer coming back is always in the back of your mind, and any time before we have a scan, the leadup can be full of anxiety until we get a NED (no evidence of disease) result."

The family is focusing on moving on with their lives as best they can, and Ben sees a psychologist to help him cope with the impact of battling the potentially deadly disease.

"He kind of avoids the topic a little bit, but obviously he knows he had brain cancer and he has scans and is monitored ... he knows we are here if he ever needs to talk to us."

Ford admits watching her son battle brain cancer was "terrifying", but she focused on staying positive for him, admitting it wasn't until Ben was given the all-clear that it all hit her.

"It hit the hardest when his treatment finished, and I believe a lot of parents feel the same way," she says.

"Nothing seems to be happening at the end of treatment and you are out of hospital, and it then kind of all hit me quite hard.

"There is a lot of fear of the unknown."

Ford also explains the impact the pandemic had on the experience, including the fact she was the only one allowed to stay in hospital with Ben, with no visitors (outside of his father and step-father) allowed.

"Because of COVID, the rituals like ringing the bell when you finish cancer treatments ... there was none of that."

Then there's the grief that comes with watching others lose similar health battles.

While the Starlight Express Room in the hospital was closed for much of Ben's time there, Starlight Children's Foundation was still able to offer support.

"They were largely closed during Ben's treatment, or he was too ill to go to the room, but they were great," Ford recalls.

"When the Starlight Captains would come to visit Ben it was more of a mental break for me because they would sit there and have a chat with him and make up silly jokes.

"They were animated and funny and became friends. Ben's eyes would light up when they walked into the room."

The Starlight Children's Foundation was also able to grant Ben's wish to visit an Australian Navy submarine, where he was given a full tour of the vessel and the title 'Captain Benjamin'.

Watch the video of the special moment at the top of the page.

Today, Ben is recovering well from his ordeal, although he isn't the same boy he was before his diagnosis.

"He's had every test under the sun, and he has cognitive issues. He walks with a bit of a stagger these days that he didn't have before, but all in all he's done pretty well and we are so grateful," Ford explains.

"It could have been a lot worse, obviously there could be further effects that could come up down the track from the treatment.

"The main focus is to hope that it [the cancer] doesn't return as treatment options are limited."

"The cancer ward at the hospital is eye-opening," Ford continues.

"Some parents have been there for years with children with leukaemia and then there are kids not surviving, it's pretty terrible."

This September Ben's family are encouraging people to get on their bikes for their annual Tour de Kids campaign which is aiming to raise $2.5 million to brighten the lives of over 64,000 sick kids. Visit the website to find out more. 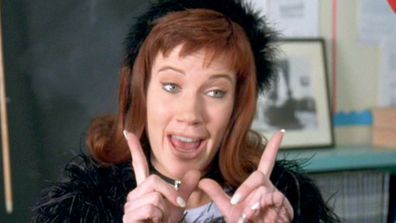 What happened to the actress who played Amber from Clueless?
View Gallery