Hollywood superstar Jennifer Lawrence has opened up about the all-consuming love she feels for her first child, son Cy, and revealed she previously suffered two heartbreaking miscarriages before his birth.

The notoriously private actress, who did not confirm she had given birth until months later and only this week revealed the baby's name and gender, has spoken about her baby son in an interview with Vogue.

Lawrence welcomed Cy with her husband of three years, art dealer Cooke Maroney in February but only now revealed details of his top-secret birth in LA, and her fears she would not be able to love him more than her cat.

"It's so scary to talk about motherhood," she said. "Only because it's so different for everybody.

"If I say, 'It was amazing from the start', some people will think, 'It wasn't amazing for me at first' and feel bad.

"I remember walking with one of my best friends at, like, nine months, and being like, 'Everyone keeps saying that I will love my baby more than my cat. But that's not true. Maybe I'll love him as much as my cat?'"

READ MORE: Richard Wilkins gushes about the 'great joy' of being dad to his five kids

In the end, she didn't need to worry. "The morning after I gave birth, I felt like my whole life had started over," she said. "Like, now is day one of my life.

"I just stared. I was just so in love. I also fell in love with all babies everywhere. Newborns are just so amazing. They're these pink, swollen, fragile little survivors.

"Now I love all babies. Now I hear a baby crying in a restaurant and I'm like, 'Awwww, preciousssss'."

Lawrence revealed she was walking up the back stairs of her LA home when her water's broke, "like in the movies."

After arriving at hospital she was in the midst of labour when her husband asked if she still wanted him to read her the inspirational quotes she had written down for him to recite.

"Obviously once you get there and you're having contractions, that's just, like, not the vibe," she said.

Instead, she chose to repeat her own affirmations, such as 'Don't be a pussy' and 'It's not that bad' as she laboured on the ground on an exercise ball.

Once he arrived, she said "it was the best thing ever, and yet totally terrifying."

"My heart has stretched to a capacity that I didn't know about. I include my husband in that. And then they're both just, like, out there ¡ª walking around, crossing streets," she said.

"He's gonna drive one day. He's gonna be a stupid teenager and be behind the wheel of a car. And I'm just gonna be like, 'Good night!' You know? Like, who sleeps?"

She jokes having a baby is like having a little voodoo doll, because everything that hurts him hurts her.

She admits wondering what he will say about her to his therapist one day. "She wouldn't put me down. She kisses me on the mouth. She asked me not to go to college," she said.

Lawrence, who is known to be political, also touched on how recent decisions in the US mattered even more in light of her new role as a mother.

The reversal of Roe v. Wade hit her especially hard. The landmark decision of the US Supreme Court that had protected a woman's right to an abortion for decades was overturned recently.

She also shared details of two miscarriages she suffered.

Lawrence revealed she got pregnant in her early 20s and was planning to have an abortion when she instead miscarried while "alone in Montreal."

After marrying Maroney, she got pregnant again with a much-wanted baby while shooting the movie Don't Look Up, but suffered another miscarriage. This time, she required a surgical procedure to remove tissue from the uterus.

While pregnant with Cy, named after the postwar American painter Cy Twombly, one of Maroney's favourite artists, she couldn't stop thinking about those who would be forced to have a baby.

"Thinking about the things that were happening to my body. And I had a great pregnancy. I had a very fortunate pregnancy. But every single second of my life was different. And it would occur to me sometimes: What if I was forced to do this?" she said.

The lack of gun control also terrifies her. "I'm raising a little boy who is going to go to school one day. Guns are the number-one cause of death for children in the United States. And people are still voting for politicians who receive money from the NRA. It blows my mind." 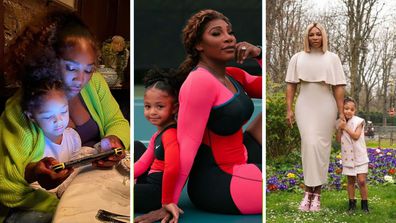