A rescue dog in the US has received a flood of applications after ?going viral online for being overlooked at an adoption event.

But a sad video of the pup receiving no attention from prospective owners went viral on TikTok?, after it was posted by one of the volunteers along with the words: "POV: you are at an adoption event and all the adoptable dogs are getting attention except for Bob, please someone get him a forever home."

You can watch the video above.?

In the caption TikToker Andrea Caceres added: "He is the sweetest pup, 3 Y/O very chill and perfect size for a NYC apartment."

The video clocked over seven million views and was flooded with comments. Not only did Bob gain a legion of fans, but a host of prospective adopters also shared their interest.

"Awwwww my poor heart can't take it," one person commented on the clip.

"How did this five second clip make me burst into tears," another wrote.

"What?! He's the cutest one there," was another response, while a fourth wrote: "Someone adopt Bob right God damn now!"

According to the Instagram page of Brooklyn's Badass Animal Rescue, Bob Parr was named after a fictional superhero from Disney Pixar's The Incredibles. He was dropped off at the shelter along with his 'wife', Helen, and two pups, Jack-Jack and Dash.

The agency also added that Bob suffered from health complications, and is "shy" and was "overwhelmed." It took about four months for Bob to finally warm up to everyone at the shelter, they shared.

But since the clip was posted the rescue centre has been flooded with applications for Bob, sharing ?the good news on their Instagram account this week.

"Oh, please tell me Bob has been adopted?" one follower asked on a post.

"We are processing the many applications we received for Bob to find the best and right home for him. We are so thankful for all the attention he is receiving!?" the shelter replied.

Speaking about the viral video featuring Bob the Dog, a spokesperson for the shelter told media: "We wish every video went viral of our dogs and others who need homes ¨Clook at how much interest and advocacy has resulted. The reality is, this doesn't happen often and there are so many deserving dogs who actually do get passed over (seniors, etc.) or don't receive as much attention at events." 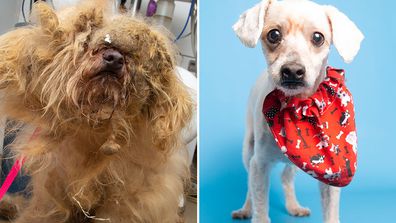