In 9Honey's weekly series Best Selfie, we present stars with old images from their Instagram feed to see how they react. Expect memories of joy, heartbreak and insecurities, all retold through the lens of time.

Matty Wilson is a lovable Aussie tradie-turned-model and actor. With a quick wit and impressive six pack, he is recognised both as the face of underwear brand aussieBum and for his role as Aaron Brennan in the soap Neighbours.

Wilson's success both at home and overseas hasn't changed him too much. In additional to all his professional endevours, his Instagram account mostly contains images of his most important highlight: his family.

"Mama Bear!" he tells 9Honey of this sweet photo, showing Wilson with his mother and nephew.

"I don't remember the actual time, but one of the most important things to me is family."

"I didn't really understand that photo until I had a kid myself," Wilson says of this shot.

"I actually have a photo almost identical to that when our son was born. We stayed up all night, without a single drop of alcohol. The photo is of me, passed out with our newborn baby sitting on my chest."

Wilson's had many big breaks over the years ¨C first as the Aussie 'Diet Coke Hunk', and then as model for the aussieBum Underwear brand.

"A friend told me there was a competition for an underwear ad, and I asked my mum to take some photos of me," Wilson said, explaining how the famous campaign started.

"The next day we got a call up saying, 'Are you free next Monday?', so we went into the AussieBum headquarters and seven days after that we opened up the Sunday newspaper, where there was a full spread of me."

READ MORE: Best Selfie: The Block's Mitch and Mark reveal the 'important' photo that cost them a 'truckload' of followers

Wilson credits his on-screen brothers Scott McGregor (who played Mark) and Travis Burns (Tyler) with showing him the ropes when it came to acting.

"That was a special photo for me because those are the two guys that held my hand through the show and gave me the confidence to be who I am today," he said.

READ MORE: A lifelong fan bids farewell to Neighbours: 'I don't think I ever missed an episode'

One of Neighbours' most notable recent stories was the marriage between Aaron and David. It was the first same-sex wedding for the series, officiated by Aussie royalty Magda Szubanski and occuring at a special time in the nation's history.

"That was the most iconic moment of my career," Wilson said.

"It was an incredibly important story for our characters and it was amplified even more when the Australian government allowed same-sex marriages to happened.

"I think it happened the day before or the day after the episode went to air. That was purely a coincidence."

Wilson's TV wedding was quickly followed up by his own wedding to Jessica Wilson.

The couple tied the knot in 2019, shortly before giving birth to their first son. They are now expecting another baby.

Describing why his Instagram is important to him, Wilson said, "I think it's really important to be able to communicate to people the messages that are important to you."

Wilson often uses his account to plug social issues, including his association with WWF Australia, an organisation committed to protecting and advocating for wildlife in Australia and worldwide.

"If you do want to make a change, having a loud voice is going to allow you to do that."

Watch Matty Wilson's full reaction in the full episode of Best Selfie in the video above. 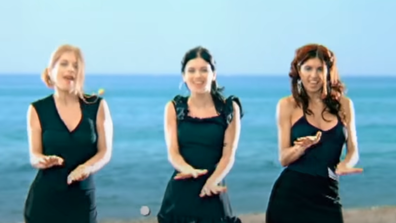 Exactly 20 years ago, this song was stuck in your head
View Gallery