An unthinkable mistake has left one woman with a lifetime of frustration.

Opening up on TikTok, @cholebhole revealed that while many people think her name is Chloe, her dad's error on her birth certificate at the hospital means that her legal name is 'Chole'.?

The video was shared by the British woman in response to a commenter that had posted on another video of hers saying, "No f---ing way your name is Chole."

"Yes way my name is c-hole, cole, coal however you want to pronounce it," the woman said in response.

"It's actually the second-most common misspelling at the hospital," she added.

"My dad spelled it wrong on the birth certificate and it never got updated."

The video quickly garnered thousands of likes, with other Chloes (or meant-to-be Chloes) uniting in the comment section.

"The bane of my life is people spelling my name as Chole," one commenter vented.

"Literally everyone misspells it as Chole! As a fellow Chloe it has always driven me nuts," another person added.

"My daughter is called Chloe and gets incredible rage when people call her chole at school. Even Christmas cards she refuses to open them!", declared a third.

One mum recalled her own father's struggle with the five-letter name, "I named my first daughter Chloe, my dad sweetly had it tattooed on his arm 'Chole'."

However disastrous misspellings on birth certificates may be when applying for a licence or a passport, sometimes it also leads to happy accidents.

Oprah Winfrey was originally meant to be named 'Orpah' after a woman character from the Book of Ruth in the Hebrew Bible, but a spelling mistake on the birth certificate had it down as 'Oprah'.

And the rest is history. 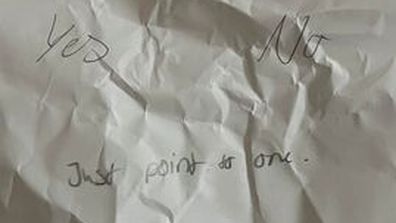