When Marla Cawthorne? noticed her baby's movements had slowed at 37 weeks pregnant, it was the first sign anything might be wrong.

After enjoying a stress-free pregnancy, a scan revealed her baby had stopped growing and Marla was suddenly faced with needing an urgent induction.

While the labour was ?fine and her daughter Ruby had a good APGAR score at birth, within 12 hours she was being rushed to special care with fears she was at risk of having a cardiac arrest.

READ MORE: How hypnobirthing helped Maddie have her dream birth: 'Everything we wanted'?

"Her blood sugar levels were really dangerous. The pediatrician and nurses were swarming the room, they thought they were going to have to revive her," Marla told 9Honey Parenting.

"I had just given birth and wasn't in the best state, they just scooped her up and took her away and my husband and I followed, not knowing where we were going."?

After five days in special care and 10 days in hospital all up, Marla and her husband Aroon were able to take Ruby home. But it soon became clear their baby was still struggling.

"?Once we were home I felt in my gut that something wasn't right. She wasn't waking for feeds, she looked unwell and was really tired and jaundiced," she recalled.

"We took her back to the hospital a couple of times, and she was going weekly, aside from that to the jaundice clinic. And they were telling me everything was fine, that I was a nervous first-time mum and everything was OK."

But when she took Ruby to her GP at five weeks old, she was finally taken seriously, with her GP escalating her care and requesting further testing.

"It was heartbreaking. It's the last thing you want an innocent newborn to go through."?

Referred from there to Sydney Children's Hospital, Randwick, the couple were told to bring Ruby in the following day. But Marla's mum instincts told her they couldn't wait, and instead they took Ruby to emergency.

When the endocrine team saw her, they tested her thyroid and cortisol levels. Despite regular tests, as often as every half hour, Ruby was so unwell she didn't flinch or cry.?

READ MORE: Woman questioned by police after picking up wrong child from daycare?

"She was a six-week-old baby and I didn't understand why she wasn't crying when getting the needles ... it was very traumatic and heartbreaking. It's the last thing you want an innocent newborn to go through, and to not be well enough to respond."

After conducting an MRI? they found Ruby had an ectopic posterior pituitary gland. Despite being the size of a pea, Marla describes it as the 'master gland of the body. As it controls the production of crucial hormones included growth and thyroid hormones, it can be life-threatening if it's not functioning correctly.

Doctors told the couple Ruby had hypopituitarism?, meaning she had multiple hormone deficiencies.

"When they gave me that diagnosis... the natural thing as a parent you think, 'What does their future look like? How can I keep her alive?' ... Kids get sick all the time," Marla said.

READ MORE: Turia Pitt reveals what shocked her most about motherhood?

In the first year, they had to be admitted to hospital if Ruby got sick and couldn't keep her medication down?. A few times they've also had to administer an intra-muscular injection when she's been in a life threatening adrenal crisis.

"Just to know in my mind at that point, that this was it, it was never going to get better than that for her. For me it was heartbreaking, and with the lack of growth hormone the implications for puberty and her future fertility, when she reached puberty would she have to be on estrogen?"

The team also explained Ruby's new treatment regimen. ?While the medications used to replace the cortisol and thyroid hormones came as tablets, they're only available in adult dosages, meaning Marla has to cut these into quarters, crush them and draw them up in a syringe she gives Ruby orally.

But the hardest of all is the growth hormone, which, until last week, has needed to be administered every night since Ruby was 18 months old. Now, thanks to the federal government listing a new treatment on the PBS, it's once a week.

READ MORE: TikTok video reveals why you should never use your fingers to save a choking baby?

?"Every night it's still tears, it hurts her and actually, I feel like quite a lot of anxiety around it, until it's given to her no one can relax in the house," Marla said.

"Now moving to once a week, it changes her whole life and completely restored my hope that her future will get better. I've had tears of joy about it."

READ MORE: 'I couldn't believe it': Aussie mum's shock after routine eye-check up with daughter?

One thing growth hormone will play a role in is Ruby's development through puberty and beyond, including fertility, something that weighed heavily on Marla. Although her condition is rare, she has been able to track down others, and hearing their stories of having their own families gives her hope Ruby too will have the option, should she choose to.

Connecting with others in similar situations, often through the Australian Pituitary Foundation has also helped her to feel less isolated and Marla only wishes she'd had people to speak with when Ruby was a newborn.?

"I have heard some stories recently and spoken to people with hypopituitarism? who have had had children. It's music to my ears, that people have that option," she said. 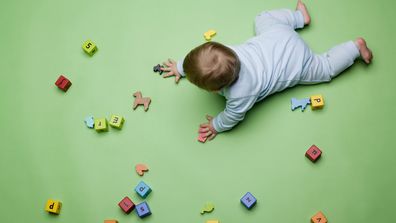