It's a nerve-wracking inevitability that eventually every parent will briefly lose their child at some point.

Whether you get separated in a crowd, they run off in a shopping centre ... or they pull a prank on you and hide in the playground like my child. Those few minutes can feel like a lifetime as you run (often literally) on pure panic.

But one dad had a few helpers on hand to reunite him with his young son - named Juan Cruz according to the thread, by way of a band singing his name across a crowded square in Argentina.

In a video uploaded to Reddit, a man can be seen lifting a young, distressed boy onto his shoulders to help him scan the crowd for his dad.

Soon others join the search, chanting his dad's name -Eduardo, before the band change tune and start singing his name and, according to a Spanish translation on the page, "come pick up Juan Cruz".

Before long his relieved dad appears, looking a little confused by the situation before giving his son a big hug as the crowd cheers.

Many Reddit users were impressed with the crowd's solution, with one saying: "It worked!!! A memory for a lifetime."

"The way people joined to find his father is just awesome," added another. "THIS is the type of community/world I want to live in!," agreed one.

Others shared their own stories of being lost as a child.

"It was a fair in upstate NY for me. A vender had me stay at his area until I was found," recounted one.

While one shared how their brother had his own mini-adventure after becoming lost at a zoo.

"He was gone for a good while but was very properly taken care of by a friendly Zookeeper. While he was terrified at first, this girl had apparently fed him some fancy ice cream, calmed him down, and then drove around the park in one of their vehicles, as they were yelling/searching for our parents," she explained.

"He got to use their megaphone, and they also had some time to occasionally (briefly) stop and look at some of the animals." 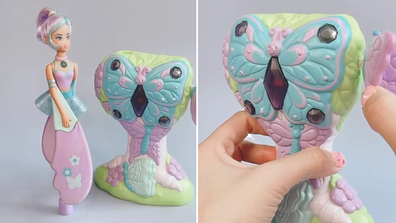