We all know things don't always go to plan when it comes to giving birth.

Babies have a way of messing up even the most perfect birth plan, as a new mum in London found out recently.

Amona Kadiku was in an Uber on route to hospital to give birth to her second child when he had other ideas, making his entrance as the car sped towards the hospital.

Kadiku, 36, who is a senior marketing manager as well as a yoga teacher, had hoped to have a calming water birth in a pool at Chelsea and Westminster Hospital in London, but didn't quite make it, according to a report in the Evening Standard.

Ms Kadiku, who lives about 20 minutes from the hospital, had called an Uber and was racing to hospital with her partner Kojo when she realised she wasn't going to make it.

"We started the ride and it just progressed so quickly. I was nervous, and I was still in a lot of pain, but I wasn't scared. I was just thinking 'Okay, this might happen here'," she said of the moments leading up to the birth.

As the Uber driver and Kojo attempted to keep her calm, she gave birth in the car before scooping her baby son Adam into her arms. They were just one street from the hospital.

When they arrived minutes later, the Uber driver and Kojo shouted for help before a stretcher was wheeled out.

"Some people on the street were clapping and shouting congratulations", Ms Kadiku said.

Mother and child were admitted to hospital where they were checked over.

Despite most people thinking that was enough excitement for one day, there was another surprise in store for Ms Kadiku. Her partner later went down on one knee at her bedside and proposed.

"We both cried," she said. "I didn't even really properly listen to what he was saying, because everything was so overwhelming, but of course I said yes."

The pair later contacted Uber in order to get in touch with the driver and pass on their thanks.

There is no word on whether they had to pay a cleaning fee.

Earlier this year a US woman gave birth on the side of the road while her other children looked on as she was driving herself to hospital.

Heather Skaats, of Kentucky, told the US TODAY show she noticed she was having light contractions three weeks before her due date, and with a history of long labours, decided to run an errand.

She set off behind the wheel of her van, with five of her older kids inside, when her contractions suddenly intensified. She eventually pulled over and got out of the van moments before she gave birth to a little boy.

She then got back in the vehicle, with the placenta still attached, and drove herself back home.

She and her husband were on route to the hospital to give birth to their second child when her baby arrived while she sat in the front passenger seat moments after her husband pulled into the car park. 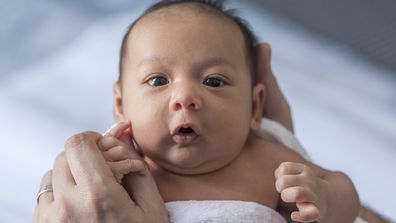