When it comes to throwing your child a birthday party, it is always good to keep in mind their interests and plan something you know they will enjoy.

A mum in the US has chosen an unusual venue for a 12-year-old's birthday party and by the looks of things, it is a day he will never forget.

Self-described crazy mum, wife and coffee lover Aleea, who goes by the TikTok user name emtmomlife82, posted the video of her son's 12th birthday bash last month at a Hooters restaurant and it has since gone viral, racking up 1.5 million views so far. Watch above.

The video starts with her son sitting at the table waiting for his birthday cake. Across the screen is written, "He wanted to go to Hooters for the wings. Yeah right!!! No he didn't order wings. Hahahaha."

As he turns to see the cake being carried to the table, he flashes a sly smile.

"Happy birthday," the hostesses say as they place the piece of cake down in front of him.

"Thank you," he replies shyly, before they ask how old he is.

"12," he replies, before they break into a Happy Birthday song.

The video has received more than 144,000 likes and drew thousands of comments. Many noted how shy he looked while others said they thought he was blushing.

Others praised the mum for making her son's birthday dreams come true.

"What a cool mum you are doing this for your son... something to remember," wrote one. "The joy in his eyes awesome mum," said another.

Others saw the funny side.

"My mum would've grounded for me just asking," said one.

"My man looks so happy I love it haha," said another, while another commenter wrote, "That smile on his face will always be the best memory."

Hooters restaurants started in the US and are perhaps best known for their waiting staff, known as "Hooters Girls", who wear revealing outfits. 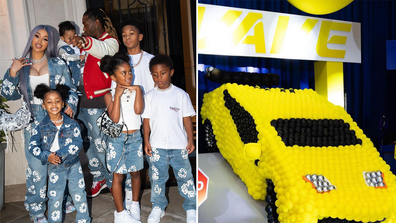