Our parents were smacked too, and much, much more. Smacking, spanking, hitting, beating, flogging all seemed to be acceptable methods of child discipline.

READ MORE: Teachers reveal the worst part of their job

Today there are fresh calls to criminalise smacking kids. This comes after the release of new research that shows those who experience violence during childhood are almost four times more likely to experience mental health struggles such as anxiety and depression.

With a childhood like mine, you'd think I'd be in favour of smacking being criminalised. But I'm not.?

Raising children is complicated, particularly when it comes to unhealthy behaviours parents have learned from their parents, and their parent's parents. I know this all too well because as a result of my childhood, when I became a mother and my son used to misbehave, I would feel the urge to smack him, and sometimes do more than that.

Some of my earliest childhood memories involve me running for my life to avoid being smacked, so it stands to reason that I learned anger equals violence. Anger equals smacking. When I felt anger or frustration as a new mum I wanted to smack.

I was determined not to.

My sister and I both struggled to resist this terrible urge for at least two years, calling each other each time we felt like smacking our boys and talking each other down. We managed to break the generational cycle and to this day are so proud to have done it.

We knew we didn't want to smack our children because we remember what it felt like when we were smacked, when the person you loved most in the world, who was meant to protect you from harm, was the one who harmed you.

"When I became a mother and my son used to misbehave, I would feel the urge to smack him, and sometimes do more than that."?

It changes you. It breaches trust. No matter how many times it happens you always feel surprised, then devastated, whatever lesson your parent was trying to teach you by hitting you forgotten, blocked by feelings of fear and betrayal. And you feel alone, utterly alone.

Although when it comes to criminalising smacking, I think that is a step too far. We are not there yet. What needs to come before this is more education about why it is the wrong choice, and information about better options for disciplining your child, ones that actually work.

That's not to say the physical abuse of children shouldn't be criminalised, in fact it already is. If you go beyond smacking or spanking your child, that is physical assault and that is already illegal.

Sadly, crimes against children are difficult to discover and almost impossible to prove. Children are unreliable witnesses, unlikely to speak negatively about their parents to anyone and shame keeps them silent. More severe assaults are easier to spot and prosecute.

Smacking, spanking and hitting are extraordinarily difficult. Criminalising the acts isn't an effective way to stop ?them from occurring.

I don't believe parents who smack their kids understand the damage it is doing, so that is where we need to begin. We need to explain to parents exactly how they are making their child feel and the fact smacking doesn't teach any lessons aside from instiling fear in children.

"I don't believe parents who smack their kids understand the damage it is doing."?

The calls to criminalise smacking are clearly an attempt to curb the behaviour, but, in my opinion, it is a step too far. First and foremost, what we need is more education about how ineffective and damaging it is. And more importantly, we need more psychological support for parents who are trying to break a generational cycle of violence.

While this support currently exists in the form of parent support and mental health services such as Parentline which operates in most states and territories, these services aren't enough to help those who are struggling against the urge to hit their child.

We all joke about how hard it is to raise kids, but it really is. While we have chosen to become parents, until you actually go through it, you have no idea of how challenging it can be and most importantly, how our own childhoods can add further challenges.

I remember turning a corner as a parent when my firstborn was around three. I stopped trying to do the things I was told I should be doing to raise my child and decided to reimagine the experience for myself.

I found myself laughing when he broke something, chasing him for tickles when he was deliberately cheeky. There were still many, many moments of anger and frustration, but all of my new techniques would turn them around in an instant. But this took a lot of work, and to do that work while raising a child is tough.

I thank goodness for my sister, who I could call in a rage, who would calm me down, remind me of our goal and I would do the same for her. She'd listen to me without judgment and I would reciprocate. Looking back, I recognise what we did as a form of Cognitive Behaviour Therapy (CBT). We managed to rewire our brains.

We figured out ways to raise our children without fear and what worked for one child often didn't work for the other. What worked one day perhaps didn't work the next. But we had a more effective toolkit of strategies. That's all parents need.

And for those who say they were smacked and they are okay, it's time to start being honest about it. We aren't actually okay.

But we can turn it around, we can forgive and we can heal. And we can strive to be better parents in this way. 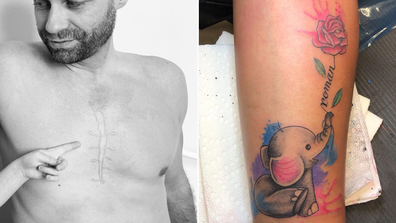 Tattoos parents got to honour their children
View Gallery