Set to welcome a new baby next year, or surrounded by pregnant friends?

Here's a list of the names you may be hearing a lot of next year, according to a list of the monikers set to go big in 2023, by website Nameberry.

Editors from the site, billed as an authority on all things baby names, ?compiled a list of their predictions for next year's 'rising stars' of names. So get your pen and shortlist ready, as we take you through their top picks.

The surprising mix covers the traditional to the very 'modern', resulting in a diverse mix with at least one name to suit almost every taste.?

Among the names that took a more traditional line, or those already popular, the first was Archie. An old faithful that has continued to gain traction in the last three years, thanks to Prince Harry and Meghan Markle choosing this for their eldest. Another was Billie?, keeping with the trend of 'boyish nicknames' for girls: think Charlie and Frankie, as well as a nod to uber-popular singer Billie Eilish.

An unexpected inclusion was Louise. Though a popular name?, having peaked in the 1990s, it's not as commonly used for babies today. Other traditional inclusions were Celeste, Marigold - tipped to be a hit as an "offbeat nature name" - and Noah, for a girl.

"Until recently most parents wouldn't have considered Noah for a girl, but based on how much it's risen in the last two years, it feels like the secret's out," declared Nameberry editor Clare.

But while no one would bat an eyelid being introduced to baby Rose, few will have met many of the remainder of the list's names. ?

First of the less common inclusions is Alden, which editor Emma said while a boy's name, could also work for girls and appealed as it was "charming, understated" and "a little bit woodsy".

Others include Breland, inspired by the singer/record producer and Cosmo, who Scarlett Johansson is credited with making cool. Dolly Parton fans may approve of Jolene making the cut, thanks to being "retro and quirky" and having its own "built-in lullaby".

More divisive names include Luxury, Tru and Linus. ?True, shared by Khloe Kardashian's daughter (though spelt True) was predicted to be a hit for being short and sharp. Luxury - a big call given just 10 girls were named this last year - is tipped to become more popular based on the increasing usage of 'Lux' for boys and girls.

"Luxury is just one celebrity baby away from being a massive hit," said Nameberry editor, Sophie. "I have a feeling it will rise exponentially."

Others were inspired by current naming trends, Everest for the shift towards 'outdoorsy' names, ?as was Wilde.

Trends towards sounds also helped push Halston into the mix, think Hailey, Hadley but unisex and 'modern'. As well as Omri, having a "soft sound" and Romy for it's "caramel sauce rich" sound.

Rounding out the list was Elio, which will feature in the new Disney/Pixar film and predicted to be the "next Arlo" Sunday?, thanks to influencers the Labrant family using this for their youngest, as well a Sayer.

Lastly, apparently we could be meeting a lot more Yunas. Picked for its broad appeal, having roots in Japanese, Korean, Chinese, Russian, Ukranian, and Breton, it is also similar to one of 2022's top names, Luna. 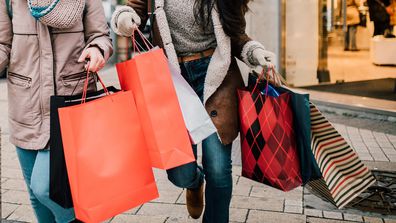