Two couples in the US have been left "blindsided and devastated" after a mix-up at their IVF clinic meant they mistakenly raised each other's biological children for four months.

One of the couples Alexander and Daphna Cardinale, have spoken publicly about the ordeal that left them raising another couple's child while their biological daughter was being raised by that couple.

The parents from Los Angeles are now suing the fertility clinic, California Center for Reproductive Health and it's owner Dr Eliran Mor, for medical malpractice and negligence.

Mum Daphna Cardinale revealing the family are still processing what's happened. "It's still a daily struggle and will continue to be," she says.

In an interview with PEOPLE, Daphna's husband Alexander said he could feel there was something wrong the minute he laid eyes on his newborn daughter.

"It was sort of a primal reaction. It was a little jarring, but I shook it off and cut the umbilical cord," he said.

During the first few month's of the child's life the couple both admitted their new daughter looked nothing like them.

Mum Daphna tried to convince herself and her husband that she was just a baby and hadn't yet developed their features.

She said despite not knowing she wasn't her biological child at the time, she felt very connected to her daughter.

"She felt so familiar to me because I carried her and I birthed her", the mum told PEOPLE.

Their suspicions continued to grow as family and friends commented on how different the baby looked to the rest of the family.

"She looked like she could actually be a different ethnicity than us because she didn't really look like us", the mum said.

Despite this the couple and their five-year-old daughter Olivia fell in love with the baby, "she just really folded into our lives and into our hearts."

Things began to get confusing however when the IVF clinic they used to conceive contacted them a month after the baby was born to ask for a photo of the new addition.

Daphne thought this was quite odd so she bought a home DNA test kit - which ultimately led them to the truth.

"We got an email that basically said that she was genetically related to neither of us," Alexander explained. "That's when our world started falling apart."

Terrified about what had happened, the couple hired an attorney who began investigating the situation.

Days later the IVF clinic notified their attorney that the couple's embryos had gotten mixed up in the lab and their biological girl was recently birthed into another family who were using the same clinic.

After extensive DNA testing on both couples and their babies, the parents shared photos of their children with each other and things became very clear.

The Cardinales' biological daughter was blonde-haired, blue-eyed and looked very much like her parents and sister Olivia.

Through the text the couple also learned their daughter's name, Zo?. A name they have decided to keep.

Navigating the bizarre situation, the couples met in person over a number of weeks and exchanged babies for brief visits but eventually all decided they needed to permanently switch and look after their own biological babies.

Big sister Olivia was devastated about the news, and begged her parents not to switch babies.

Nearly two years have passed since the couples learnt of the news and it is still extremely hard for everyone involved but as a result of the mix-up, the families have forged a strong bond.

The other couple have decided not to speak publicly or be identified. 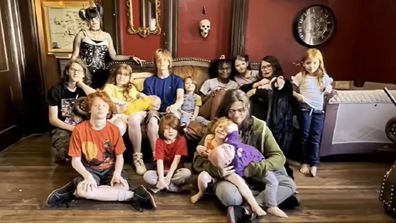