Parents are being urged to reconsider letting young children use metal straws after a four-year-old boy suffered a life-threatening throat injury that left him minutes from death.

The freak accident in the US state of New York occurred in June but only just came to light and sparked a warning from a paediatric trauma specialist not to let children use the straws.

Charlie DeFraia was sitting on a porch ledge outside his family home sipping a yoghurt drink through a straw when he suffered a fall. The force caused the straw to puncture his tongue and throat, piercing a major artery in his neck and cutting off blood supply to his brain, according to a report in TODAY.

His parents were alerted something was wrong when his sister Madison, 8, who had also been on the porch, let out a "bloodcurdling scream."

Mother, Crystal, at first thought he had "busted his nose or his lip, or bit his tongue" when confronted by the sight of her son's face covered in blood. "I never could have imagined that it was as serious as it was," she said.

His father Charles, an internal medicine doctor, was also at home. He initially thought Charlie had bitten his tongue, but realised he was losing "a serious amount of blood" before he stopped breathing.

As luck would have it, an ambulance was nearby to rush the boy to hospital. Realising the seriousness of the situation, paramedics activated the highest level of trauma so police shut down all roads on the way to Stony Brook Trauma Centre, allowing them to make the trip in 13 minutes, instead of 45 minutes.

On arrival, the hospital's chief of paediatric trauma Dr Richard Scriven, a 30-year surgical veteran, was shocked by the amount of blood Charlie had lost.

"He had really no measurable blood pressureˇ­ He essentially had lost nearly all his blood," he said.

Knowing a simple tongue laceration couldn't have caused this, a carotid artery injury was suspected, so they asked his parents if anything could have punctured his throat.

They immediately thought of the straw.

The hospital's director of paediatric neurosurgery Dr David Chesler was able to stop the bleeding with gauze. He was then intubated and given a blood transfusion before scans showed a complete loss of blood flow in Charlie's right carotid artery. It also showed his brain wasn't getting enough blood raising fears he could suffer brain damage.

The torn artery needed to be fixed but none of the surgeons present could reach the damaged area because of its location behind the boy's jaw.

Dr David Fiorella, director of its cerebrovascular centre, was called in to work out how to stop the bleeding and save the vital blood vessel.

Dr Fiorella made a small puncture in Charlie's right femoral artery in his thigh and inserted a catheter which was then snaked along to the site of the neck injury.

He made a new artery out of metal stents, then deployed a stent with a covering on the outside to seal the gaping hole.

"It not only stopped the bleeding and sealed off the bleeding, but also restored normal blood flow to the right side of Charlie's brain."

The procedure took just 45 minutes. Charlie spent a week in a medically-induced coma on a ventilator in the paediatric intensive care unit.

When he woke up, he was initially unable to move the left side of his body, but made improvements every day. He was discharged from hospital on July 7 and now has normal movement except for a couple of fingers on his left hand.

He is taking Aspirin and a blood thinner, but will start Kindergarten this week.

Dr Scriben says "everything fell into place for Charlie that day."

"I truly believe another five minutes and I don't think we'd be looking at this beautiful boy here," he said.

He suggested people throw away their metal straws, "or at least don't let children use it."

"They've been in the garbage since the day after the accident," she said, adding they are "so thankful" to the medical team who saved her son's life.

Metal straws have been implicated in a number of deaths. A British woman died in November 2018 after she fell while holding a drink and straw, which impaled her eye and caused a fatal brain injury.

Starbucks recalled 2.5 million metal straws in 2016 after reports of children cutting their mouths on them.

Meanwhile, a four-year-old Queensland boy was almost blinded when he poked himself in the eye with a metal straw, requiring surgery. 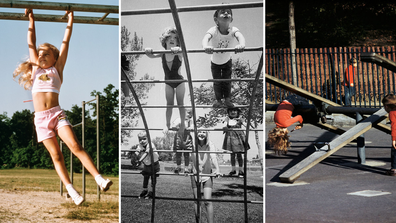