Charlie Clode is only seven, but the little boy has already had more than 100 stints in hospital.

Charlie, from Canberra, was born with the congenital heart condition pulmonary atresia with VSD and MAPCAs overriding aorta. In simple terms, he was born without a proper connection between his heart and lungs.

Because of his complex medical needs, even a common virus can send the family to hospital, his mum Melissa told 9Honey.

It's a lot for a little boy, and for Melissa, who has an 'international holiday' sized suitcase permanently packed waiting for their next admission, never knowing if they'll be in for 24 hours or three months.

As Charlie has to be treated both in Canberra and at The Children's Hospital at Westmead, Melissa has developed a few tricks to make the environment more homely. And despite all he's been through, Melissa said he's just like any other kid.

"He's a gorgeous little boy. He's gregarious seven-year-old who loves his dog and his trains and has a larger-than-life personality," Melissa said.

"For us, we've always had the philosophy that first and foremost he's a little boy and we make sure he can be a child while in hospital."

Ensuring they always take along his own blanket and pillow, favourite books and toys, she tries to make Charlie feel like he has space to be a kid ˇŞ who happens to be there for a procedure, rather than focusing only on his treatments.

But there's one item she couldn't help with: his clothing. Due to all the medical equipment Charlie often needs to be connected to, he was often unable to wear anything. Not only did this impact his comfort, it was also another reminder he was in hospital.?

But thanks to the charity Supertee, he's not only been given a shirt designed specifically for kids undergoing medical treatment, he's given a boost of superhero along with it.

The t-shirt, invented by dad Jason Sotiris after watching his own daughter Angela go through treatment for an aggressive cancer as a toddler, has press studs down the sides, making it easy to unbutton without having to lift over a child's head.

While that may not sound revolutionary to the uninitiated, it means kids can wear these even if they're connected to IV lines and drips and monitor cords. It can even be worn during many procedures, including MRI and PET scans.

Melissa said this has made their hospital stays far less traumatic. Including a recent stay, where Charlie to have a PICC line near his heart for the duration of a six-week course of antibiotics and without which, he wouldn't have been able to wear a shirt during that stay at all.

READ MORE: The request that left one grandmother crying in bathroom for three hours

"Being in a hospital environment can be very traumatic for adults, but even more so for little children. In a way he's growing up there, so things like Supertee, where he can wear a superhero outfit even in that environment, and where he may otherwise not be able to have worn clothes, it makes him able to be more of a little boy. He still gets to have his childhood, regardless of the environment," Melissa said.

"It's important for kids at any age. It's easy to forget in clinical settings that these little kids are human and they realise when they're dressed and not dressed."

Especially when they're well enough to leave their rooms, and are able to walk the corridors without feeling self-conscious. ?

A former tradie, Jason's own experience of watching Angela beat Langerhans Cell Histiocytosis, a rare form of cancer she was diagnosed with two weeks after turning one, and which they'd been told she had just a 20 to 25 per cent chance of surviving, prompted him to create what he could to make their treatment easier.

Despite never having sewn a button, his frustration at how difficult it was to change Angela, whose treatment would often cause her to vomit, ?led to a lightbulb moment.

Launched in June 2018, Jason has managed to distribute more than 13,000 shirts to hospitals across Australia, despite being a mostly volunteer-run charity.? 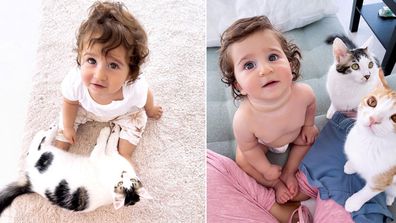