A?h toddlers, they're a unique beast. Give them a tiny crumb of something they want and they transform into a super sleuth.

So it should be no surprise that a toddler, excited for Christmas, would get curious about any bags they see coming into the house and go on a hunt for presents.

One dad, however, was caught out after his hiding spot was detected by his adorable toddler, who made short work of uncovering all her Christmas presents early.

Sharing the saga on TikTok, Jason Madden from the UK shared his shock at the situation, captioning his personal disaster: "When santa didn't do a good job of hiding the presents."

Starting the clip showing his daughter standing in front on a bedroom door, a panicked Jason says: "No way has my child just found all her presents."

His curious daughter then asks: "But what is it, is it for Christmas day?".

His efforts to distract her and move the conversation along by saying 'there's nothing' failed, as the toddler doubled down, declaring: "Yes it is! Yes it is!," with some adorable foot stomping.

"It's Christmas day, we need presents," she continued. "I saw toys and a Barbie".

Jason then declared: "Christmas is cancelled."

?The video quickly went viral, racking up over 1.1 million views and counting. Other parents were quick to offer suggestions, many saying he should tell her they were for someone else.

"Tell her they are for family," said one. "The amount of times I've grabbed bargains with the kids there but told them it's for their cousin?."

"We have to buy them, then Santa's elf picks them up and Santa checks his list to see if they have been naughty or nice. That was my story anyway," suggested another.

While others said it was a common dilemma. "I regretted doing my shopping early they know where I hide them," empathised one mum.? 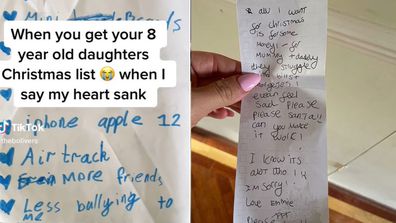 The best letters to Santa: From bold to heartbreaking
View Gallery