Suzie Vurmeulen lived every parent's worst nightmare when she stepped into the backyard just as two-year-old daughter Sophie fell into the family pool.

"We had all the pool safety things in place, with the fence and everything. I didn't think that it [pool safety] would still be an issue even though the fence was installed," she tells 9Honey

The Sunshine Coast mum made sure both her daughters, Allie, four, and Sophie, knew about pool safety from a young age and both girls were confident in the water.

They were always supervised and wore floaties, and Suzie taught them both that if they ever fell in the pool, they should open their eyes and swim to the edge to try to climb out.

READ MORE: 'I asked my husband to quit his six-figure job and be a stay-at-home-dad'

"Allie was swimming on her own by two-and-a-half, she was pretty good in the pool," Suzie says.

"But I did explain to her what would happen if her little sister falls in the water."

With so many precautions in place, Suzie never imagined anything could go wrong.

That is, until one sunny day when Suzie left the girls to play outside while she got to work cleaning the house.

Like any two- and four-year-old, Allie and Sophie were making plenty of noise from the backyard and Suzie could keep tabs on them that way while they played.

"All of a sudden I didn't hear them so I thought 'okay, I'll just check what they're doing'," she says.

Suzie realised something was terribly wrong the moment she stepped outside and saw the pool gate was open.

At that very moment, two-year-old Sophie tumbled in.

"My heart dropped. It was really scary and I was a bit in a bit of a shock for the hour after," she recalls of the terrifying moment she saw her daughter sink under the water.

"I was just in time reallyˇ­ it all happened really quickly because I came out and ran towards them."

Suzie arrived just in time and was able to scoop Sophie out of the pool, where she had been submerged for less than 30 seconds.

"My heart dropped. It was really scary."

Once safely in her mum's arms, the dripping wet toddler began to cry and Suzie had to explain to her other daughter, Allie, what would have happened to Sophie if she hadn't come outside when she did.

Then the mum-of-two set about figuring out how her girls had gotten the pool gate opened in the first place.

It turned out that Allie had managed to climb the pool fence and lift the gate latch - which didn't have a lock on it - then instructed her little sister to push the gate open.

Swimming pools are responsible for 35 per cent of drownings in the under 5 age range, a terrifying statistic that hits far too close to home for Suzie after her daughter's close call.

Sadly, her family's story isn't all that uncommon.?

The MagnaLatch? Pool Safety Report, commissioned for national 'Check-Your-Pool-Gate Month' this December, reveals one in five families had a child gain access to their pool unsupervised.

Of those children, more than 50 per cent used a chair or another object to access the gate, while 27 per cent climbed the fence as Allie did.

After the terrifying accident, Suzie made sure to install a lock on the pool gate and is urging all other Aussie families to do the same as summer kicks off this month.

"A lot of mums are not non-stop watching what the kids are doing when they're playing in the backyard and it's just something that not everyone is aware of," she explains.

"Although you have all the right things in place, it can still go wrong."

The report also showed that close to half of pool owners simply forget to check their pool area is safe, which could be putting kids at risk around the country.

That number is made all the more alarming by the fact that 38 per cent of families have had a negative experience involving a pool, such as a near-drowning or having to rescue someone like Suzie did.

"I would definitely recommend, after what happened to us, to have a lock in place for the pool fence. Especially if you have kids who are good climbers," she adds.

"Get it done. Better safe than sorry." 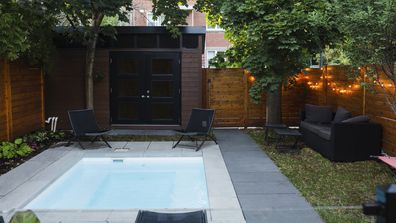 Plunge pool inspiration for even the littlest backyard
View Gallery