S?he is already the mother of four children, ranging in age from 18 to 13.

But German supermodel Heidi Klum says she wants to have a baby with her rock star husband of three years, Tom Kaulitz, 33.

Klum, whose eldest child Leni is following in her modelling footsteps, also shares three children with former husband Seal. But despite being six months off turning 50, she admits she has babies on her mind.

She told The U.S. Sun she often thought about starting a family with the Tokyo Hotel singer, whom she married in 2019.

"I mean wanting it and it actually being possible are always two different things," she said.

"The big 50 is just around the corner. And things get harder when you get older.

"When the clock ticks when you get older it is not as easy as it was when you are younger. But would I want it? Sometimes I think yes."

Klum's eldest child, Leni, was fathered by Italian businessman Flavio Briatore but raised by Seal, whom Klum started dating when she was pregnant. He even adopted Leni in 2009 when she was five.

She then went on to have a high profile romance with the much younger New York art dealer Vito Schnabel, before meeting and subsequently marrying ?Kaulitz, her third husband.

Klum was also married to hair stylist Ric Pipino prior to making it big as a model.

She credits the fact both she and Kaulitz are German as one of the reasons they click, and has described him as an "amazing" stepfather.

"I'm sure it's not easy to step into an immediate family, having all of a sudden four kids and teenagers," she told US Weekly last year.

"They were easier when they were younger, for sure. Every age comes with its challenges."

She revealed at the time her new husband was teaching Henry how to drive, having previously done the same for Leni, who recently appeared with her mother in a lingerie campaign.

The mother-daughter duo? posed for Italian lingerie brand, Intimissimi, in a shoot designed to "celebrate women."

"Together with @intimissimiofficial we celebrate women; the love and support between a mother and her daughter; and how confident, beautiful and happy lingerie can make you feel," Klum wrote on Instagram.

The campaign certainly got plenty of attention, but not everyone was a fan.

"I like to think I'm progressive [with] these things but [a] mum and daughter in lingerie in the same video shoot is just a bit ick," was one take, while another commenter said it was "weird in many ways."

If she does succeed in having another child, she will join a growing list of celebrities who have become mothers later in life, including Hollywood actress Hilary Swank, who recently announced she is pregnant with twins at 48.

Aussie actress Rebel Wilson, 42, also recently announced the birth of her first child, who was carried by a surrogate.? 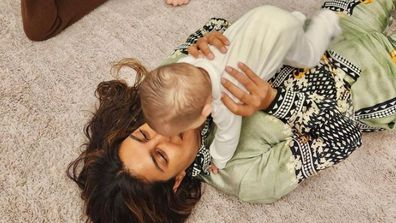