Wrapping Christmas presents is somewhat of a chore, so it is great if you can find a little light relief while you are on the job.

A Queensland mum got just that when she noticed some unusual details in the Christmas wrapping paper she bought from a popular Aussie retailer.

And it seems she wasn't alone in getting a laugh, judging from the response of other mums after she raised the alarm in a post on Facebook.

Nicole Blears took to the C?hristmas Mums Australia closed Facebook group this week with a warning to other mums.

"To anyone who purchased this cute wrapping paper from Typo... just a little thing or two I noticed," she wrote, alongside some photos she had taken of the paper in question.

While your eye might first go to the oddly placed yin and yang symbol beside the snowflakes, which is sometimes used to represent the male and female, there are a couple of other naughty surprises.

A couple of Santa's reindeer appear to have found something better to do than pull a sleigh, and are instead fornicating on a snow-covered mound.

But that's not all!

A closer inspection of two snowmen standing side by side on another hill will also show something is amiss.

The snowman on the left is happy, but the one on the right is shocked. It is missing a carrot used for their nose, and it appears to be located further down the snowman's anatomy.

Commenters were quick to show their appreciation for the post.

"Hahaha is this for real?" asked another commenter?. "Oh my God, my mother-in-law's present is wrapped in this?."

"Typo is known for its slightly inappropriate, quirky things," said another. "?I think it's hilarious."

But that's not all. Other eagle-eyed members of the group realised there were matching gift tags.

"I bought the Christmas present stickers to match and now I need to have a look and see if they're the same," wrote one, before checking and finding the same images.

"Oh my God, so good. I'm definitely putting this one on my mum's present."

?Fans of the wrapping paper can find it online on the Cotton On website, which is part of the same group as Typo. 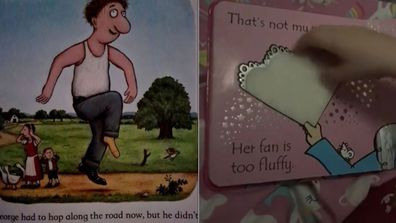