A woman has sparked a heated online debate after declaring babies don't belong on airplanes and parents who choose to travel with young children are "selfish".

Explaining that she'd recently flown from the UK to Barcelona and had to endure a baby crying, the experience left her so incensed she took to Mumsnet to vent her frustrations.

Unfortunately for the woman, being a forum for mostly mums, her short-lived discomfort was not met with much sympathy. ?

"It was the worst plane ride of my life! A poor newborn baby was screaming at the top of its lungs the whole flight," the woman began, adding she was a mother herself.

"I know how stressful it can be in a public place when your baby starts crying but I would never take a tiny baby on a four-hour flight."

"It's not fair for the baby and it affects all the other passengers on the plane. I think it's quite irresponsible to bring a freshly born baby on a plane, I'm sure this will be an unpopular opinion but a lot of the people on the plane were being affected by it."

While she may have been looking for support, she was instead reminded that planes were public and open to everyone.

"Being stuck on a flight with someone who annoys you is all part of flying. It's not irresponsible however much you felt put out by it," said one.

"Babies cry, bad luck. Stay home if it bothers you so much!," added another, while a third sarcastically joked: "Maybe they should put babies in the cargo hold?".

Others shared their own difficult experiences of having to take their own children on flights, reminding the mum it wasn't always for a holiday.

"I don't think you know the circumstances or the reasoning as to why they took their baby on a four-hour flight (and if you think you suffered, how do you think they were suffering?!)," said one.

"?I had to fly to my home country for a family funeral with my six-week-old reflux baby. It was awful and made much worse by the tutting of a lady behind me. It was a deeply traumatic time," added another.

She did have some support, though, with some even saying they'd pay extra to guarantee a child-free flight.

"Probably wouldn't be a popular opinion here however I somewhat agree," said one. "The journey must feel forever for a child. It's also not fair on other passengers listening to a screaming baby for hours.

READ MORE: Mum left in tears after teacher cruelly mocks son for 'having a dog's name'? 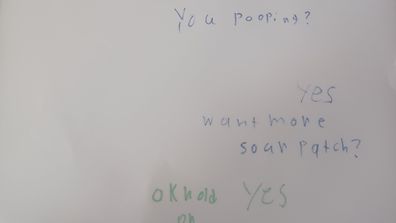