Bringing a new puppy home can come with all sorts of teething problems, but these new dog owners found out the hard way when they came home from work to find their entire house flooded thanks to a chewed water line.?

Charlotte Redfern and Bobby Geater's 17-week-old Staffordshire bull terrier Thor had decided to have a go at the water supply linked to the kitchen fridge while they were at work and it did not end well.

Describing the scene as a "disaster," the UK couple shared a video of their flooded rooms on TikTok, with the video amassing millions of views.

You can watch the video above.

?READ MORE: The most popular pet names of 2022 have been revealed

"When your Staffy pup knocks through the kick board and chews the water supply for your fridge while you're at work,"? Geater captioned the clip.

In the clip, Redfern can be seen wandering around the house, showing off a soaked floor, including their new living room carpet. Meanwhile, Thor sits perched on top of the couch looking on.

"The dog was just looking at me as if saying, 'What have I done?' He was just totally oblivious to anything that's happened," she told Newsweek.

"He was just sitting there, wagging his tail."

Geater said he believed Thor may have knocked the kick board that normally covers the ?water pipe off with one of his toys, before finding the plastic pipe and biting it.

It took five-and-a-half hours to drain the room, with the couple sharing follow up videos to show the state of their now dry floor.

"After Thor flooded the house we are back to normal," Geater captioned another clip.

The videos were flooded with hundreds of comments from their amused followers.

"Think you named him after the wrong god. Loki the god of mischief suits him better," one person quipped.

"Bet he thought it was great fun," another said.

"He's just too cute I can never be angry at him at all," a third wrote.? 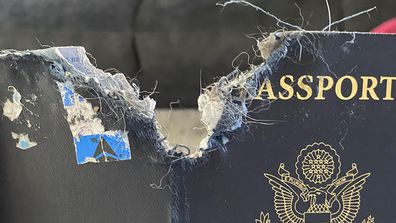 Destructive dogs and cats caught in the act
View Gallery