Prince Guillaume and Princess Stephanie of Luxembourg have announced they are expecting their second child.

The happy news has been shared via a statement on the royal family's social media accounts.?

The couple are already parents to Prince Charles of Luxembourg, born in May 2020, and Charles' sibling will be born in April 2023.

Prince Charles is second in line to the throne behind his father, and the new baby will be third in line of succession.

Prince Guillaume and ?Princess Stephanie have delighted in becoming parents.

Upon the birth of their son in 2020, Prince Guillaume told waiting media outside Grand Duchess Charlotte Maternity Hospital in Luxembourg it had been a "wonderful day."

"A birth is a message of hope. It's a blessing," he said.

"I think this is what we're so happy to be able to share with Luxembourg but also over the borders with all the different countries."

Princess Stephanie, 38, and Prince Guillaume, 40, were married in October 2012 after dating for two years.

The pair met in 2004 through mutual friends and began dating in 2009. Their wedding was attended by royals from around the world.

They took they time to become parents, enjoying their time as a married couple and dedicating themselves to their royal duties.

Prince Guillaume is the eldest child of Grand Duke Henri Luxembourg and his wife Grand Duchess Maria Teresa and the heir of Luxembourg. 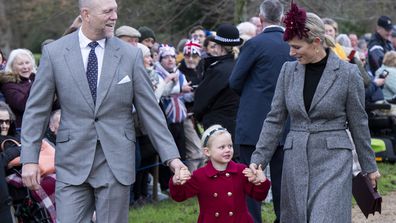