I?t's a universal truth that anything you don't want ruined should be kept well away from children.

One woman, however, thought she was safe in the company of her teenage niece. But the decision cost her a cool $20,000 thanks to a prank which destroyed her favourite coat.

The woman, not taking this lightly, has given her sister the option to pay up, or have the teen taken to court over the saga.

READ MORE: Experts reveal the baby names set to soar in popularity in 2023?

Explaining the situation on Reddit, the woman shared how she had married into a rich family and after admiring her mother-in-law's Loro Piana cashmere coat, was given one of her own last Christmas.

While she'd known it was expensive, it wasn't until her 16-year-old niece Googled the brand that she found out it cost $20,000.?

When she found out, she stopped wearing it for a while for fear of ruining it. But when this winter came around, she decided to try it out again, to visit her sister. ?

"While I was putting it back on to leave, I felt something go splat on my back, then my niece started cackling and the smell of paint hit me," she shared.

"I was so pissed off while she was not apologetic at all. Her mum screamed at her and said she was grounded. Then she said she will pay for the dry cleaning."

As the woman was leaving she saw that her niece had posted a reel capturing the prank, with the caption: "I'm going to hit my aunt's $20k coat with a paint filled balloon to see how she reacts".

After sending it to her sister, it was taken down, but when she was given bad news about the coat, the woman declared grounding wasn't an adequate punishment.?

"The next day I found out my coat can not be saved, so I called my sister and told her that her daughter has to pay it back. Well, we got into an argument and she said that they will not be paying it, and if I wanted a new one, I should get my husband to buy it for me," she said.

"I think that they should pay for it (they can afford to, in my opinion they should sell my niece's car and pay me back my money)."

When they couldn't reach an agreement, the woman said she'd be suing, saying she had a strong case as the video proved it was intentional and her niece was aware of the cost.

As she'd had mixed reactions to this move, she turned to Reddit to ask if she was overreacting. The majority sided with her, saying the teen's actions were intentional, therefore she was liable ˇŞ and shared their outrage for her.

"She ruined a $20k coat. She wasn't even apologetic," said one. "If your sister won't give her daughter proper punishment, you may need to force it," added another.

"Knowing that it was 20k. That's like intentionally crashing a car," surmised a third, while another said: "What a gigantic brat."?

"It would be one thing if she accidentally spilled something on it but this was malicious for online fame," argued another. 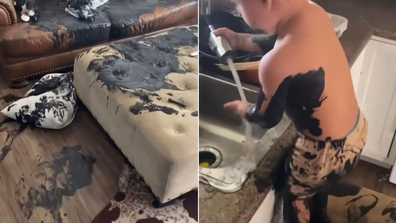