No, you're not seeing things, a giant Bluey really has taken over New York City.

Making the trip from sunny Brisbane to the Big Apple, the loveable blue heeler flew high above the streets as she took in the sights and greeted her many fans.

But it wasn't all about the sightseeing, with the six-year-old making a huge accomplishment: starring in her Macy's Thanksgiving Day Parade. And at the height of a four-storey building and seven taxis wide, she made sure she left a big impression.

The event saw more than 3.5 million people line the streets of Manhattan to watch the giant balloon float by, while just shy of double Australia's population - 50 million people, in the US watched along on TV.

In the crowd were some very special spectators in the show's creator? Joe Brumm and Melanie Zanetti and Dave McCormack (the voices behind Chilli and Bandit), who it was revealed only met "for real life" for the first time this week.

?Fans on Bluey's official Facebook page praised her performance, acknowledging the huge moment by saying: "Welcome to the club, Bluey."

"A beloved character becoming a balloon at the Macy's Parade in NYC is a pretty big deal," said one.

"I've watched the parade every single year for as long as I can remember and we are SO excited that Bluey is making her debut!," added another.

"?I am embarrassed over how excited I am for this," joked a third. "I'm pretty sure I'm more excited than my kids," agreed one mum.

The parade has been running since 1924, when employees from the department store first marched down 34th Street dressed as clowns, knights and other characters, accompanied by a small number of floats and bands.

It's continued to grow in popularity, especially after featuring in the 1947 classic film Miracle on 34th Street. Today it's one of the highlights on NYC's calendar.

The appearance topped off a stellar week for the cartoon.

READ MORE: 'Horror story of the year': Mum awoken by police after her toddler escapes their home in the night?

Earlier this week Zanetti and McCormack appeared on The Tonight Show with Jimmy Fallon, where the host declared it the "best show on TV right now".

There was also a red carpet debut at the prestigious Madison Square Garden for Bluey's Big Play, and an appearance at the International Emmys.

The show, now in its third season, continues to kick goals back home, too. It's the most downloaded show in ABC iView's history and is nominated for an Australian Academy of Cinema and Television Arts Award for Best Children's Program.

?For a daily dose of 9Honey, subscribe to our newsletter here. 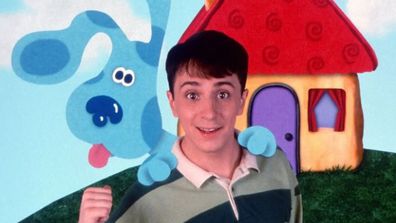