A? mum has recalled her personal 'horror story' after waking to find police in her bedroom, altering her that her toddler was found wandering the streets after escaping their home.

Saying she was still wracked with guilt over the incident?, the mum shared how she had no idea anything had happened until a police torch was shone in her face.

Explaining on TikTok that she'd put her kids, aged two, five and eight, to bed at 8pm, she then checked on them at 10.30pm, before she too went to bed, and found them sleeping soundly.

Her husband came to bed an hour later, with nothing amiss then, either.

"And then at about 1.45am, I am woken to three police officers coming into my bedroom, not my front door, my bedroom. Thank god this is a night I chose to sleep in pyjamas," she recalled.

"[They said] 'we found a toddler in your front yard, crying and screaming and cold, we have them outside in an ambulance'," she continued.

In her 'dead sleep' haze, the mum then rushed to her son's room, finding his bed was empty and rushing outside.?

While her son was physically fine, she was left shaken by the incident, saying it would be a long time before she slept properly again.

What worried her the most was how she was completely unaware of his escape.

"?The fact that I did not wake to the baby monitor that is stationed in his room, to the door opening, to police officers knocking on my door, to anything at all," she said.

"I don't know how long he was out there."

The mum also shared her concerns about what the police must have thought of their parenting, given his escapade went unnoticed.

Other mums on TikTok were quick to share their own stories of parenting tiny escape artists or multiple trips to emergency.

"When my oldest was three he ran into a three-lane highway when I was buckling his little brother into the car seat. He was fine, I was not," shared one mum.

"I have one that went to the ER twice and had to call Poison Control within six weeks. I was convinced 'they' would take my kids away," added another.

"I cant imagine. but, you're not a bad parent, toddlers are a different breed. He probably planned it," joked one.

Another commenter said they were a reformed escape artist. ?

"I used to do this when I was a kid except I would walk two miles to my grandma's house. My dad had to get an extra latch for the top of the door," they said. 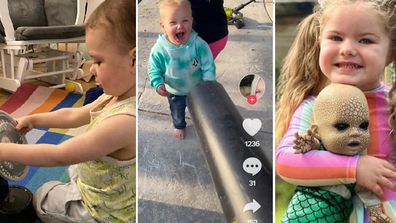