All new parents will tell you how hard it is to deal with a crying baby for hours on end.

So it is only natural that people will end up trying just about anything to get their baby to settle or into a sleep routine.

Now a new mum in the UK has shared a simple technique she claims will settle a crying baby in seconds ¨C and it has taken the internet by storm.

READ MORE: Why former child star Ryan Reynolds won't let his children follow in his footsteps: 'Usually about the parents'

Micha Bailey, a make-up artist and mother-of-two from Kent, took to her TikTok account this week to share her super easy tip for settling a crying baby.

The 52-second video starts with Bailey sitting on a couch holding her crying baby.

"So I learnt this today," she said over the wails. "If you've fed your baby, winded your baby, done everything and they're still not settled, watch this."

The scene then changes to Bailey standing in another room, holding her baby in her arms as she demonstrates the technique.

"You want to put them low, like this," she says as she holds the baby lengthwise, with the head sitting just below chest height.

She says the next step is simply to "drop your knees" repeatedly, ?which she demonstrates as the baby instantly begins to settle.

"I swear to God, I've done it all day and she stopped crying and eventually she'll fall asleep," she continued.

Bailey said she was skeptical when she first learned about the technique.

"I didn't think this was true, but it is and it works, and I can't believe it," she said, adding "I wish I knew sooner."

She uploaded the video ?with the comment, "No way it works," and the hashtags #momhack #mumhack #fyp #newborn and #hack. It has been viewed 1.4 million times in just two days and received more than 145,000 likes 1600 comments.

"I have honestly never loved someone more in my life right now than you. My daughter has been so unsettled all day. Just done this for two minutes and she's asleep," said one mum.

"I did this with my nearly one-year-old in the middle of the night when he woke up unsettled and it worked," was another comment.

Others said the technique had another benefit. ?"Simultaneous squat workout too. Win/win," said another.

Although others said the technique wasn't for everyone. "Oh that's a young mum's game. My creaky knees could never."

Others surmised why the technique worked. "I think it mimics the walking sensation they feel when in our tummy," said one.

"It's the movement up and down," said another. "I was doing this 24 and 21 years ago with my daughters [and] now do it with my grandson." 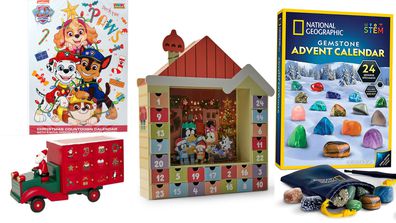 The best advent calendars for kids for Christmas 2022
View Gallery