Anyone who has been pregnant knows that a baby bump is rarely off limits. Whether someone is trying to touch it, or simply comment on its size, it is something that can leave women feeling upset.

Now a pregnant woman has taken to TikTok to hilariously take down a troll who tried to fat-shame her.

Claire Warren is a mother-of-one who is seven months pregnant with her second child. She regularly posts videos about life with a toddler on her TikTok account, Mykindamum.

READ MORE: Woman turns up for work hours after having baby she didn't know she was pregnant with

One such video recently went viral after she depicted a toddler spooning ladles of coleslaw onto a plate, only to say they were full.

But it is what happened next that led to her hilarious takedown. A TikTok user named Kevin posted the comment, "The size of you I think you eat that way."

Instead of being upset, Warren decided to give 'Kevin' a little lesson in both biology and etiquette.

"Just wanted to give a quick shout-out to Kevin or @noobz52 for his, um, delightful piece of trolling," she began.

READ MORE: Woman turns up for work hours after having baby she didn't know she was pregnant with

"Thanks very much for that Kev. It's just made me realise I might need to do a quick biology lesson for anybody else that might be a tad on the slow side like yourself.

"So this bump here to which you're referring, that's actually a baby and they come about when a man and a woman who love each other very much get together and have a special cuddle, which is sometimes known as 'making love' or sex.

"What that does is it makes a baby, and that baby then has to grow and grow in its mummy's tummy. This one's been here for seven months now so yeah, it is starting to get quite large, but I can assure you that it is largely baby, not coleslaw. But thank you so much for your comment anyway."

She went on, "And just as a side note, you might find you generally get more success in life with having people like you if you can just separate the difference between inside thoughts and outside thoughts.

"Thoughts along the lines of judging other people's bodies for example, that tends to be better to remain inside. Keep those ones inside your head, rather than splurging them out of your mouth or indeed typing them on social media.

"Just a little tip for free there that might help you get on a little bit better in life."

The video seemingly did the trick, with 'Kevin' deleting his previous comment. She also got plenty of comments.

"Largely baby, not coleslaw. You're freakin' great," said one. "I bet Kevin doesn't get many special cuddles," wrote one.

In another video, she offered a tip to anyone planning to comment on the size of a woman's baby bump and it was pretty simple: "Don't."

Celebrities are among those who have spoken about the impact of people's words about their pregnant bodies.

Personal trainer turned author and entrepreneur Tiffiny Hall, the wife of TV and radio funnyman Ed Kavalee, revealed earlier this year the awful comments a stranger made about her pregnant body, which left her in tears.

"People just think when you're pregnant they get to say whatever they want to you and it's a free for all," Hall said.

"And it's just hurting my feelings. It's getting a bit too much, especially because I still have seven weeks to go and everyone is like, 'Oh my God, you must be about to pop, you are massive, you are enormous'."

Kavalee agreed. "We have had two men in public... say, while I am standing there, to my wife, 'You're massive'," he said.

He added that a man in a caf¨¦ also made other awful comments to his wife, including "You must be having a girl because she's stolen your looks." 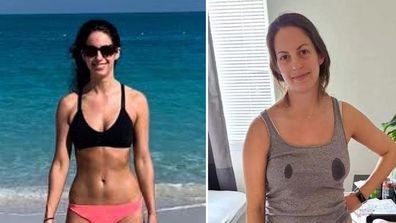