Shopping with babies is no easy feat. Often the only way to ensure both bub and your groceries make it to the car intact is to opt for putting them in the trolley.

But one mum has warned against this solution, sharing the terrifying moment a quick grocery run on Sunday morning turned into a nightmare that left her 'angry, shocked and hysterical'.

Danielle Wolff had just strapped her eight-month-old daughter into a trolley at a local supermarket in Alberton, South Africa when she bent down to grab some meat from the fridge.

When she looked up, her daughter was gone.

In chilling footage of the incident posted to her Facebook page, Ms Wolff can be seen looking around frantically until she spots her little girl in the arms of a man.

Rushing over, a shocked looking Wolff grabs her daughter and walks back to the trolley. The man, an employee at the store, then follows and appears to try and explain why he picked her up.

As Wolff elaborates, it was a harrowing experience.

"Within an instant a stranger is seen in the video taking my daughter. I look up and she's goneˇ­. I immediately look for her and find her in the arms of this man," she shares.

"I'm able to grab her from him and say what's he doing with my daughter???? Why does he have her??"

Wolff says the man was laughing and said her daughter had raised her arms so he 'picked her up'.

"I (kept) saying this is not funny, you don't touch a child, you don't take a child... this isn't a joke and I don't find it amusing."

"I am so angry, shocked and hysterical! I'm shouting where were you taking her??? What were you going to do with her???"

After reporting the incident to the store's manager, she's told the employee will be spoken to, but that he didn't mean any harm.

"I've watched this video so many times, a few more seconds and who knows what could have happened."

Wolff added that local police were now investigating the incident. 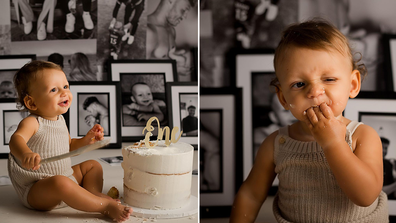